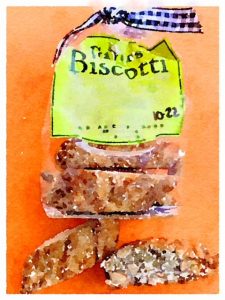 These last few weeks, I have been needing inspiration.  I felt I wanted a little adventure, but I couldn’t put my finger on where.  Then I got an image of biscotti from Gayle’s Bakery in Capitola.  THAT’s what I wanted and where I wanted to go. SO… from just a crumb of an idea (ooh) and with a willing companion in John, we were off.

But instead of heading straight there, we each put in our two-cents worth about what we wanted to see on the way north.  What unfolded was a day of magnificent local travel that provided a delicious dip into Central California’s agricultural beauty and culinary gifts.

Our two stops on the journey included two food destinations that we had never visited.  The first was the farmstand for Pezzini Farms (pezzinifarms.com), a family-owned  business since 1929. 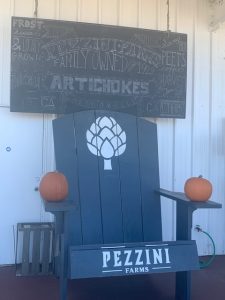 This time of year, it was “Artichoke Central.”  Different sizes of artichokes lined the produce aisles, and jars of artichoke related products were on nearby shelves —artichoke pesto, marinara sauce with artichokes and walnuts, artichoke salsa, and more.  (You can order from their website!) Plus, there were piles of other fresh vegetables including just-cut stalks of Brussels sprouts, all sorts of dry pasta, olive oil, bread, and even artichoke cupcakes!

After buying our goodies, we moseyed over to the nearby artichoke food cart called The Choke Coach, with their motto of “Even Artichokes Have Hearts,”  and tried fried artichoke hearts, a fried artichoke taco, and cream of artichoke soup…when in Rome…And had we had any room, we could have visited a nearby Hawaiian shaved ice shack that was providing people with colorful flavored mounds of ice and toppings.

Next on the agriculture tour was Gizdich Ranch (gizdich-ranch.com) located near Watsonville.

We knew about the Ranch because we had sometimes treated ourselves to one of their fruit pies from our local market.  Wow!  The place was hopping.  People of all ages were in the orchards picking different varieties of apples, others were lined up to buy their deli items or pieces of pie a la mode, and some were eating their purchases at picnic tables out back. We picked a few apples, bought an olallieberry pie, and loved being a part of such a lively earthy experience.

And finally, Gayle’s Bakery and Rosticceria!  (gaylesbakery.com). We entered with many other aficionados, took our number to wait our turn to pick and choose, and while we waited, feasted our eyes on all the goodies— sandwiches, luscious deli items, all shapes and varieties of breads, cookies, colorful cakes, morning pastries, and, of course, biscotti!  When our number was called, I went straight for the biscotti—mission accomplished—and added on a few other treats to keep the biscotti company.

Our day was a treat—we experienced the beauty and bounty of our Central California agricultural area up-close-and-personal and also saw and tasted treats created by artisan cooks and bakers.  Sometimes one doesn’t have to travel far to feel uplifted and inspired!  One just has to be open to that initial spark.  Thank you, biscotti!

I’ve just finished my first read-through of a cookbook-travel book called Friuli Food and Wine.  Written in part by two Friuli aficionados—sommelier Bobby Stuckey and chef Lachlan Mackinnon-Patterson of the restaurant Frasca in Boulder, Colorado— the book provides an in-depth dip into the wine terroir of the region and a fun romp through the cuisine. The stories, recipes and photographs are engaging and provided appropriate reading this month since October is Italian-American Heritage Month AND National Pasta Month! Mangia bene!

In keeping with the Italian nature of this month, I have to share some U.S. postal stamps a friend told me about that I just “had to” buy! 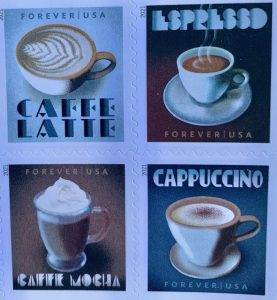 Have a fun Halloween!!

6 thoughts on “Thank you, Biscotti”