A Weekend in San Francisco 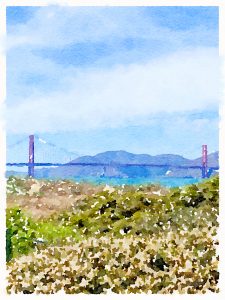 It was time.  Time to visit my childhood hometown of San Francisco.  And to even stay over a few nights in the Marina District—woo-hoo!

I got to see Golden Gate Bridge, hear the foghorns, feel my hair frizz in the morning mist, walk and window shop along the city streets, eat fun food and feel the vitality of city life.  All good!

My Saturday adventure included a walk to the West Coast Craft Fair at Fort Mason Center and the nearby Flax and Paper Source stores for art supplies.  John and a friend visited Golden Gate Park and enjoyed the San Francisco Botanical Garden “Flower Piano,” an annual five day event where 12 pianos are scattered throughout the gardens for music groups to use for performances and for individuals to play as well.  John was especially impressed when a seven year old girl spontaneously sat down and played by heart a piece John has been trying to learn!  SO…our creative selves were nurtured.

And then there was the food…one night we had Italian food al fresco at the Delarosa on Chestnut Street with a spicy pizza and a salad of gold and red beets, kale, farro, sliced almonds, goat cheese and avocado, with a vinaigrette dressing—very tasty and one I’ll try at home; then on our way to our motel room, which had a kitchen, we stopped at the local market to pick up breakfast fixings so we could “play house”; the next night we ate outdoors at a nearby Peruvian restaurant called Jaranita which is on a closed-to-traffic restaurant street.  My favorite dish was an empanada sampler. 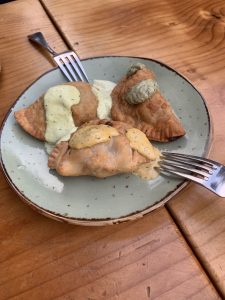 On Sunday, as we were walking past The Palace of Fine Arts to the Marina Green, we saw all these young people carrying their coffee cups.  When we asked where the coffee was from, they said the Philz Coffee Cart on the Marina Green.  That’s where we headed and enjoyed our pour-over coffee

as we watched groups of dogs and owners romp on the grass.

A nice return “home” and a nice hit of city vibrancy.  A wonderful next day postscript to the trip was a FaceTime Cocktail Hour with two San Francisco high school friends!  Thank you, San Francisco, for all your gifts, then and now.

I just finished reading How to Eat by Thich Nhat Hanh, a short straightforward missive on mindful eating. It helped me slow down my eating and to savor.  “Eat in a way that is relaxing and brings you joy.  It doesn’t take too much organizing and the results are profound,” Thich Nhat Hanh suggests.

On the way up to the city, we drove along Highway One, veering off a few miles to Pescadero, and found Duarte’s Tavern, established in 1894, where we had been told we absolutely had to have their creamed artichoke soup. We did; it was good; and I have since found a recipe for it and will attempt to make it sometime soon.

Remember all our plums?  Here are five collages I created using the parchment paper imprints the plums made as they were drying in the oven! 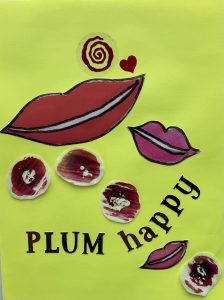 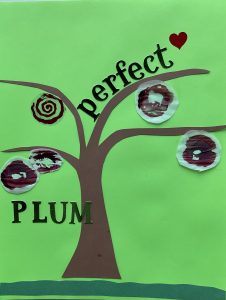 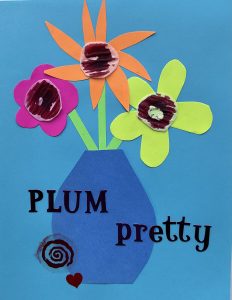 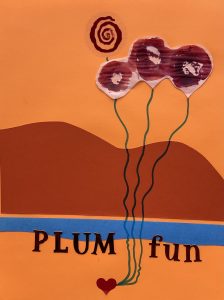 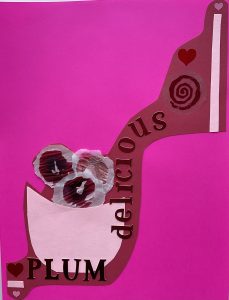 14 thoughts on “A Weekend in San Francisco”