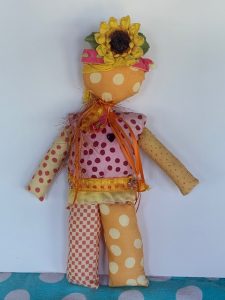 I have a slight polka dot fetish. I have polka dot plates, bowls, egg cups, napkins, silverware,  salt and pepper shakers, pillows, clothes, ceramic critters and and even a doll that I made. What can I say? Polka dots just make me happy. 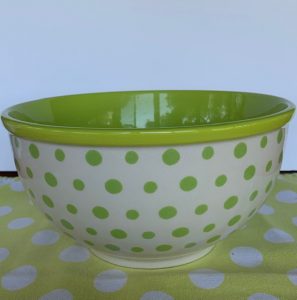 So what is it about these little dots that enchant me, us? Ingrid Fetell Lee, a designer, and author of Joyful: The Surprising Power of Ordinary Things to Create Extraordinary Happiness, says roundness is associated with playful objects, like balls, marbles, balloons, so seeing polka dots can elicit feelings of play. And many of them together give a sense of abundance. Also, circles give the feeling of safety because there are no rough or sharp edges to frighten us. SO…there is a lot to those little dots that are positivity enhancers! 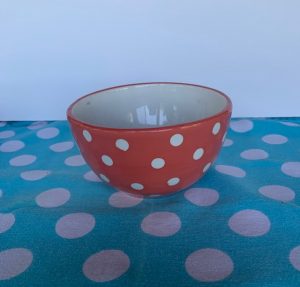 The Japanese artist Yayoi Kusama, who often uses polka dots in her work, once described the significance of the dot as “…having the form of the sun, which is a symbol of the energy of the whole world and our living life and also the form of the moon which is calm….” 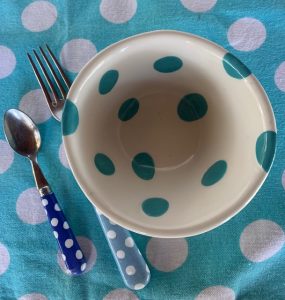 Historically, the term “polka” in part goes back to a Czech word for the polka dance–“pulka” which means “little half” in reference to the “short half-steps featured in the dance.”

The popularity of the dance led to many polka-themed products. The term “polka dots” describing a spotted fabric first appeared in print in 1857 in Godey’s Lady’s Book, a Philadelphia-based women’s magazine of the time.   It apparently was quite a popular fabric pattern. 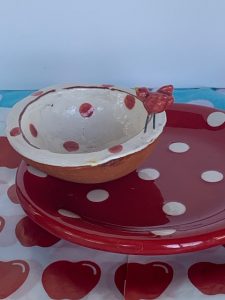 Then in 1928, Minnie Mouse wore a red polka dot dress and other movie stars of the mid 1900’s—like Shirley Temple, Marilyn Monroe and Lucille Ball—were also on the polka dot band wagon. Add in the 1960 song “Itsy Bitsy Teenie Weenie Yellow Polka Dot Bikini” and more polka dot wearers like Twiggy, Goldie Hawn, and Julia Roberts during the second half of the 20th Century and and we had a polka dot extravaganza on our hands. 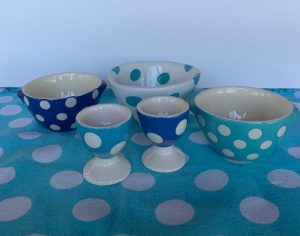 Who knew my little aqua napkins and green polka dotted salad bowl carried so much heft!

For me, they are just plain fun—cheery little design elements that make me smile. I wonder what you have in your table-setting repertoire that makes you smile! 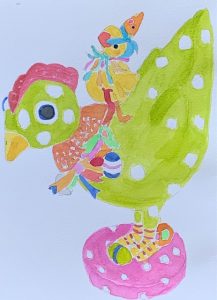 “There is never a wrong time for a polka dot.”

P.S. National Polka Dot Day is January 22 next year…just so you know😉

6 thoughts on “Here’s to Polka Dots!”