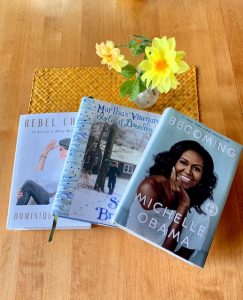 Quite a time in women’s history…Kamala Harris has just been named Biden’s vice presidential candidate and August 18 celebrates the 100th year anniversary of the official ratification of the 19th Amendment granting women the right to vote*.  Wow!

Probably no coincidence that three of the books on my reading pile are memoirs by women. Here’s what each book brings to the table, so to speak:

This memoir is divided into four sections.  In “Becoming Me,” Michelle discusses her family, education, and beginning career choices. “Becoming Us” is about her relationship with Barack and then their becoming parents.  Next, in “Becoming More, ” we see her as First Lady and how she creates and implements projects she believes in. The epilogue briefly describes the transition from the White House to the next part of her life.

Michelle says, “For me becoming isn’t about arriving somewhere or achieving a certain aim.  I see it instead as forward motion, a means of evolving, a way to reach continuously toward a better self.”

This book is a good read, both informative and inspirational.  A friend and I created a mini-two person-book club to read and discuss the memoir; we also responded to prompts found in a companion “Becoming” journal.

I came away with a better understanding of Michelle’s personal voice, style and values and the opportunities and challenges her life provided.  I’m a fan.

This book is one of many by Susan Branch,  a talented painter, writer and cookbook creator whose work I have enjoyed for years.  In this part of her memoir series, she shares her life in a very open and personal way.  She is coming out of a marriage and decides to leave her California home territory to travel to Martha’s Vineyard. There, she finds new directions for her life and creates her first of many illustrated cookbooks called Heart of the Home.

Each page of her memoir and cookbooks is hand written, hand drawn, watercolored, and peppered with quotes that she loves. I have a few of her cookbooks—The Summer Book and Autumn–and enjoy the visuals as much as the recipes.

To check out her style to see if it might be of interest to you, go to susanbranch.com.  She has a new book coming out for Christmas.

Her approach to living? “Do your best to believe in yourself, and even if you don’t, keep trying to and never give up.  If all else fails, use your imagination and pretend.”

Rebel Chef: In Search of What Matters by Dominique Crenn

This memoir is written by  Dominique Crenn,  a chef in San Francisco who owns three restaurants and is the only women chef in the United States to have been given a three-Michelin star award for her Atelier Crenn.  Her self-described “curiosity” and “courage” are energizing.  I am only half way through the book but am hooked.  I am learning where and how her love of food began, how her desire to be a chef came to be, and how she evolved that love and desire into unique and successful restaurant ventures.

Her take on growing is “…I never regarded any circumstance to be the end of the story.  Living is moving.  Nothing is learned by standing still.  We are all works in progress.  This is how I see things, good or bad—as an invitation….”

I am impressed by these women.  All of the authors give credit to loving and supportive families and to drive and optimism. Each carved her own path in her own unique way, according to her talents and values.

In essence, isn’t that what all of us attempt to do, men and women alike–to be who we are at our best and to keep evolving.  I hope so.

*I’m just beginning to make a Suffragette doll…in white, with a purple and gold sash! I’ll post her photograph on the blog’s gallery on August 18!