Let’s Hear It for Pasta! 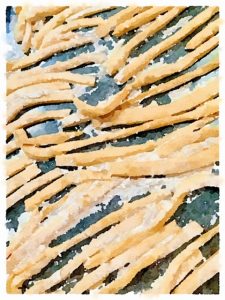 Pasta is one of my comfort foods, so I decided to make some this week.  Oh, my.  Good thing John and I have a sense of humor.

I started with a recipe I found in Heirloom Kitchens by Anna Francese Gass, a cookbook of classic recipes and stories from the tables of immigrant women from around the world. The “tagliatelle” recipe I chose was that of the author’s Italian grandmother and mother.

I hadn’t made pasta in years. But there I was assembling the ingredients—flour, eggs, olive oil, water, salt—and finding that large bowl, rolling pin and sharp knife. I loved making and kneading the dough, cutting it into strips, and feeling connected with all those pasta makers of my family heritage.

As the pasta rested a bit, I made my first-ever butter sage sauce, assembled a garden salad, got that pasta water to come to a “rolling boil” and plopped in the tagliatelle.

My pasta was a little thicker—understatement—than the norm and therefore took longer to cook than the prescribed time. When it reached the “al dente” stage, I put on the sauce, poured the wine (!), and we were off on our taste adventure.

The hearty pasta actually tasted quite good, though a bit chewy. I did warn John to eat slowly and not too much just in case my creations had expansion ideas.

At the same time, I remembered that one of my dad’s homemade specialties was a kind of free-form gnocchi called “malfatti”—which means “poorly made.” As Father’s Day is approaching it seemed an appropriate honoring of my dad. Here’s to you, Augie!

Would I make pasta again? Yes, indeed. But maybe I’d retrieve our ancient pasta maker from the back of the pantry…or as the instructions implied just roll the dough flatter and cut it a little thinner. Make that a lot thinner!

4 thoughts on “Let’s Hear It for Pasta!”