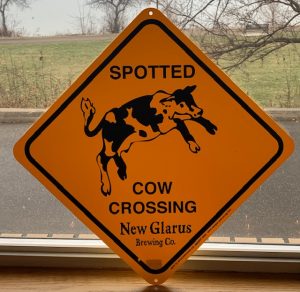 There we were on our way to the small Wisconsin town of Mineral Point, when John decided he’d like to buy some of his favorite beer–Spotted Cow–straight from the source. So we found our way to the New Glarus Brewing Company and had a fun, unexpected time there.

First, we took the self-guided tour through the brewery. Walking the pristine hallways in what is a very modern facility was educational. Large signs placed strategically throughout the building explained the history of the brewery and about each stage of the brewing process from the delivery of the malted barley to the milling to the fermenting and ultimately to the assembly lines of bottles being filled, labeled, capped, and packaged. The mechanics of the whole process made me appreciate the genius of designers and engineers and the workers who work hard to create a good product. It was emotional–and this was before the tasting!

The idea for the brewery was that of Deborah Carey, who spearheaded a return to her home state of Wisconsin in 1992-3. Her husband Dan had years of experience in the brewery world; he found the location; Deborah created the capital for it; and off they went. Deborah Carey is the first woman to found and operate a brewery in the United States. The brewery and their craft beers have won many awards for excellence.

The philosophy of the owners was shown throughout the facility in telling quotes:

“A positive attitude leads to a positive outcome.”

And one by Francis of Assisi:

“He who works with his hands is a laborer

He who works with his hands and head is a craftsman

After our tour, we did the tasting–natural for John, a Wisconsinite whose father was in the brewing business in Milwaukee; not so natural for me, but I loved it and found a beer I liked! We also purchased a variety of their beers, some seasonal, some year round like John’s Spotted Cow, a traditional unfiltered ale, described as “fun, fruity, and satisfying.”

All of New Glarus Brewing Company beers are sold “Only in Wisconsin.” Our tasting guide told us that some out-of-state fans carry beer bottles and cans wrapped in socks, shoes, etc., in their suitcases so they can have a New Glarus beer on their home front. With names like “Totally Naked, “Pumpkin Pie Lust,” “Fat Squirrel,” and “Serendipity,” how could they resist!

For more information, including a video on the story of the Careys and the brewery, check out newglarusbrewing.com.

And if you ever find yourself in Wisconsin–you never know–New Glarus Brewery is an entertaining and inspiring stop. As they say, you’ll “know you’re in Wisconsin when you see the Spotted Cow.”

6 thoughts on ““Only in Wisconsin””