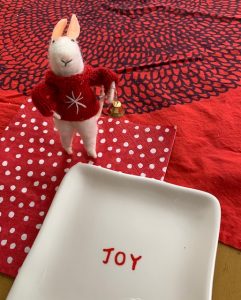 “Yes.” It has arrived! The holiday season and the “first wine of the harvest”–Beaujolais Nouveau 2019.

I first became familiar with Beaujolais Nouveau when a friend and I were writing a wine blog–and doing all the necessary research that that involved! A tough job. I liked the wine then; I like it now.

It is light, fruity, almost tannin-free and as the label says, a dry/medium dry red. It is wonderful on its own or with food and is nice slightly chilled (one article I read says to put the wine in the refrigerator for 20 minutes before serving). It is also inexpensive–Whole Foods and Trader Joe’s both have it, ranging from $10-12. Some wine conosseurs feel it is best to drink it within six months of its creation; some even say by the end of the year.

Not only do I like the wine, but I also like the history and the whole hoopla around the wine. Created from the first harvest of Gamay grapes each year, it is released about six to eight weeks later on the third Thursday of November at midnight. That is when it is first available in its home country of France; and that is the first date it can be officially sold in other countries. The declaration that accompanies its release–“Le Beaujolais Nouveau est arrivé!” (The new Beaujolais has arrived!)–is cause for celebration in many areas of the world.

The phenomenon of the popularity of the wine and the much anticipated release is credited to George Duboeuf, and his son Franck, even though there are many other producers of the Nouveau and the production of this early harvest wine had been celebrated in local wine communities around Lyon for decades.

Though I was late in seeing my first bottle this year, when I did, I bought two 2019 George Duboeuf Beaujolais Nouveaus. With the label by artist Laura Runge entitled “Joyous Crush,” how could I not.

We invited two neighbors over for an “arrival” party, and we had great fun welcoming that first Beaujolais of 2019 and the holiday season. The wine, as in previous years, was light and fresh. We matched it with some classic Wisconsin cheese from Fromagination, a Madison shop for all things cheese and, by the way, a wonderful place to order cheese gifts for the holidays. (fromagination.com.) We had a five-year aged Gouda, a Sartori BellaVitano Cheddar-Parmesan cheese immersed in Merlot, just to continue the wine theme, a straight-forward Gruyere, nuts, crackers, a few kinds of salamis thrown in for the Italian-American in the group, and chocolates.

AND, one of the cappers for the evening was that one of our friends brought us the small plate shown above that says “Joy.” I had just seen the very same plate that day and resisted buying it. “It arrived” in its own way. Let’s hear it for serendipity and generosity!

6 thoughts on “IT Has Arrived!”