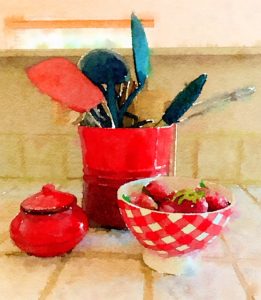 Saying  “A woman’s place is in the kitchen” might cause a stir.  But I just finished a book called A Woman’s Place (2019) that addresses that concept in a unique, positive, and assertive way.

“Yes,” the authors say, a woman’s place is in the kitchen–as remarkable leaders, innovators, pioneers, and activists “who changed the world of food. And…who used food to change the world.” They shine a spotlight on over 45 women or groups of women across five hundred years of history and many cultures in order to give these women their due and to inspire “members of a new generation to embrace their own creativity, to transcend their own circumstances, to take energy from what came before and to use their skill–in any profession–to change the world.”

I think they’ve accomplished their goal. The authors Deepi Ahluwalia and Stef Ferrari, with illustrator Jessica Olah, have produced a fun and inspiring book filled with bite-size pieces of women’s culinary history and contributions.

Here are a few tidbits I learned about female movers and shakers in the world of food:

Catherine de’ Medici introduced the fork, an Italian invention, to the French table in the 16th Century along with many Italian ingredients that became a part of French cuisine.

Melitta coffee filters were created by a woman named Melitta Bentz from Dresden, Germany, in 1908. Not liking the cloth filters in use at the time, Melitta perforated a sheet of her son’s notebook paper and lined a metal cup with her innovative filter and voilà–the prototype of coffee filters we use today was born. Wow!

Betty Crocker was not a real person. Rather she was an invention of the all-male ad department of Washburn-Crosby, later General Mills. A few years after this creation, a woman named Marjorie Husted, a 1913 University of Minnesota graduate, became the head of an all-female staff that answered each letter sent to “Betty” and helped promote a Betty Crocker radio show, television program, cookbook and more.

Madame Barb-Nicole Clicquot, in the early 1800’s, invented the riddling process for champagne by which “the bottles were placed upside down, allowing the yeasts to collect and be removed. The result was a crystal-clear bottle with a stable and consistent taste. Veuve Clicquot would become the gold standard for Champagne everywhere.”

I also learned about the role of food in political and social movements, about women in the beer, ice cream and Girl Scout worlds, about South Korean women divers and “women of tea” and on it goes. I acquired new information about Julia Child and M.F.K. Fisher and now have a new appreciation for all the women who have made the kitchen, whether at home or in restaurants or political movements, a vital, creative and powerful place.

“The world is in perpetual motion, and we must invent the things of tomorrow. One must go before others, be determined and exacting, and let your intelligence direct your life. Act with audacity.”

8 thoughts on “In the Kitchen”