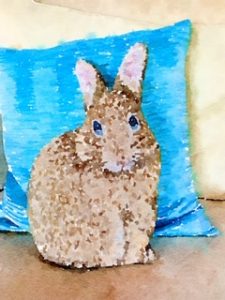 I have a rabbit fetish.  I haven’t counted how many little stuffed fabric or ceramic bunnies or silver rabbit charms I have, but let’s just say, I have many.  It all started when I had a dream about a rabbit that I identified with.   From that day on, I have been collecting.

Since we are about to celebrate Easter, I thought it was time to bring all my bunnies out to play.  And I wondered how and why bunnies became associated with Easter.  Here’s what I discovered.

One theory has it that the symbol of the rabbit “stems from pagan tradition, specifically the festival of Eostre, a goddess of fertility, whose animal symbol was a bunny.  Rabbits, known for their energetic breeding, have traditionally symbolized fertility.” (Time, April 1, 2015) There is also some documentation that the rabbit was once associated with virginity and therefore symbolically connected with the Virgin Mary in Christian tradition. Yet another theory says that the Easter Bunny or Easter Hare was of German Lutheran origin, the animal bringing eggs to children who had been good.

Although there is mystery and discussion about the connection between bunnies and this time of year, my bunnies are my companions during every season. However, I have to admit that they do become somewhat more rambunctious in spring!

SO, to all the little bunnies out there making people happy, thank you!  And to all of you readers, for hopping right along with me on this blog adventure, Happy Easter!