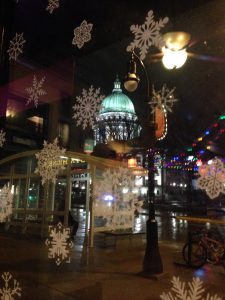 We spent a lot of time this last week around Capitol Square in Madison, Wisconsin, a wonderful hub for all kinds of activities. We tasted, and bought, cheese at one of our favorite cheese shops anywhere–Fromagination, a great source of Wisconsin cheese gifts (https://fromagination.com) We went to an Irish pub to listen to a group play traditional Irish music. And we experienced my kind of “political” activity in the Rotunda of the Madison State Capitol –200 tubas and euphoniums playing Christmas carols.

It’s called TubaChristmas and it was a hoot–literally! We went equipped with ear plugs but surprisingly didn’t need them. Perhaps the large sound had enough space to roam around to be just full and pleasant. Some of the tubas were painted red and green, some of the players wore red felt reindeer antlers, some were teenagers, some were in their eighties. All wore bright colors. Many players had played with local high school bands or in the University of Wisconsin Marching Band. They played all the classic Christmas songs–Jingle Bells, Joy to the World, Hark the Herald Angels, even Silent Night–kind of a paradox, since it was played by tubas! It was all a delightful surprise and a part of a long tradition. Apparently, the first TubaChristmas occurred 45 years ago in New York City at the Rockefeller Center Ice Rink and there are many TubaChristmas events around the country. For a list, check out http://www.tubachristmas.com.

Another night, we went to a classic Wisconsin bar-restaurant on the square called The Old Fashioned (http://www.theoldfashioned.com) whose signature cocktail is–you guessed it– The Old Fashioned. We went there with a friend who was visiting Madison for the first time; we thought the classic vintage menu would give him a “taste” of Wisconsin at its broadest. After all, the restaurant’s motto is “Where Wisconsin Is King.”

A few of the traditional food items on the menu include: Wisconsin beer cheese soup “garnished with popcorn,” beer-battered cheese curds, beer-battered Walleye sandwich, Mac’ ‘n’ Cheese with Ringed Bologna, “Wisconsin’s Best Wurst Platter,” cheese boards with all kinds of Wisconsin cheese combinations, and on Fridays, the requisite Wisconsin fish fry, with three choices of fish. Luckily for salad lovers, there are also many creative and robust salad bowls with unique Wisconsin additions such as Door County dried cherries.

To drink? Old Fashioneds, of course, including one for “non-natives,” which does not have the brandy that most of their classic Old Fashioneds do. To add to the bar menu, there are about 50 Wisconsin beers on tap and another 100 Wisconsin bottled beers.

The Old Fashioned restaurant is truly a Wisconsin traditional culinary and beverage oasis and the view out the holiday-decorated window toward the Capitol, shown above, is an upper.

So there you have it. A beginning primer on some of what this vital Midwestern city and state have to offer. “On Wisconsin.”

8 thoughts on ““On Wisconsin””